Hello Fresh, after the game interview 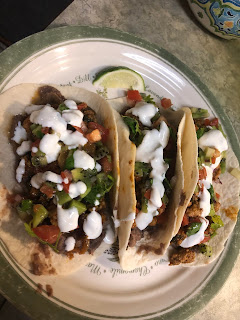 This was our most recent box from Hello Fresh.  We are finishing another discounted run with them and we are trying Happy Chef starting Monday.

I thought I would share some more info we have collected/learned since we began this.  These----> are Poblano Pork Tacos.  They were substantial enough on their own that none of use went hungry (family of 4).  We were worried that we might want more, but 3 tacos worth of ingredients were perfect.

They were not super spicy, but definitely flavorful.  Shannon made this meal on his own and really enjoyed the process. 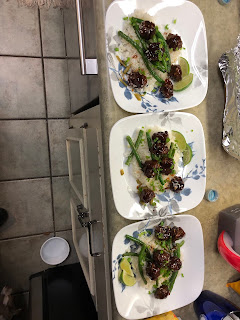 These are Hoisin Meatballs with rice and green beans.  The hoisin meatballs were super delicious and fulfilled my urges to have Asian food.  I was worried that we might feel hungry after this one, but it was not a problem.

The green beans look a little stingy and they are.  The reason for this is that the green beans were in sad shape.  This was the first time I was unhappy about a food item in these boxes.  This is after 8 boxes of meals form Hello Fresh.

I think the reason that the beans were not good is because they are not in season right now.  It looked like they got frozen, but also the ends were gross.  I only used about half the beans after I cleaned them up, half of them were fine. 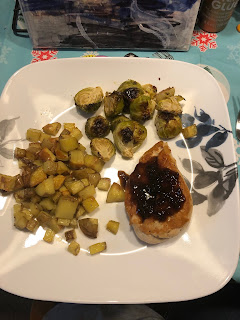 This meal looks a little smaller because the plate is LARGE.

This meal also had the green beans (this was the following week.)  The beans were again bad, so bad I just threw them out.  I roasted brussels sprouts instead.  The chicken and the sauce were delicious.  The potatoes were great.  However, I will be sending them in a complaint about beans two weeks in a row being bad.  For 8 weeks of meals, the green beans were the only thing we have been unhappy with, that is not too bad.

Carol O.
Georgia, United States
Hi, I'm Carol O. I am a Christian, homeschooling mom of 3. I live in Georgia and I love rubber stamping. I started this blog to give some inspiration to others who are looking for it.

Some of my favorite blogs