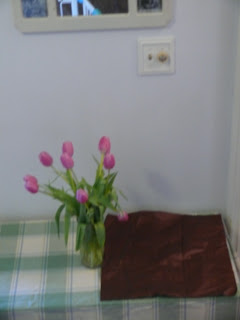 Daughter #1 is a creative soul.  She came up with ANOTHER great idea that will save you money, perk up your tired table, showcase your flowers, dress up your vases, recycle, and generally make you feel better.  How's that for a spectacular idea?!?!


See these flowers, they are so hum drum and lacking, same old tulips, same old vase and throw away paper packaging. Does this look like the last bunch of flowers you received?


Along with your pretty flowers, you probably got some very pretty tissue paper/plastic paper that they were delivered in, like this. 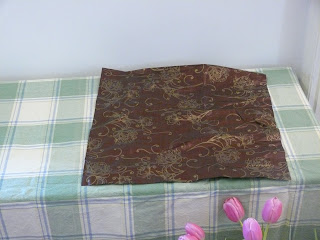 The great idea Daughter #1 had was to use the paper and ribbon from the flowers to dress up the vase.    A plain vase is sweet and pretty, but some flowers are not gorgeous in the vase and some vases are HO-HUM and sometimes you are just sick of the vase you have.  This project delivers on solving any of these problems and all the things mentioned above.  :) 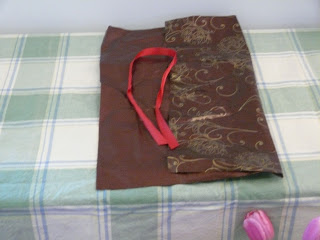 1.  Wrap paper around vase loosely and see how tall it is and how much you need to fold up.  I found I needed to fold approximately 1/3rd of the paper.

2.  Fold the excess to the inside at the bottom of the vase (not under the vase).  This will allow you to customize the height of the paper decor at the top of the vase and adjust for the height of the flowers.  If you fold the excess paper inside, it will look fuller and you can use it as a whole piece for something later, instead of cutting it up. 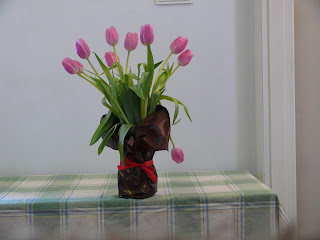 3.  Once you have the paper at the height you want it at the top of the vase, tie a ribbon around the vase at the narrow part to hold the paper on the vase and then adjust the paper so that the bottom of the vase is covered. (unlike when we forgot the check and had to take the picture 3 times to finally get it right).


4.  You can also artfully fold the paper to give it more character after you get the hang of this basic idea.  Folding back the top corners where they overlap to make an opening like a shirt collar is very cute.  You could even make a "tie" for this design to make a masculine bouquet cover.

5.  A nice balloon tied on the bouquet in the back steps up the bling another notch.  See? V  My flowers are SOOO much prettier now, than they were sitting on the table in the clear vase. 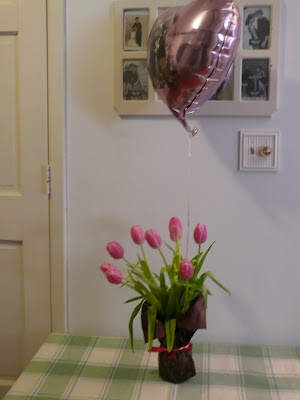 I hope you enjoy this and try it next time you have a nice bouquet of flowers that can use some "dressing up".  :)

P.S.  Husbands, you will get EXTRA brownie points if you use this technique to spruce up those lovely grocery store flowers you are going to bring home for the wife!  (you are bringing her flowers, right?!?)
Posted by Carol O. at 8:35 PM No comments:

Carol O.
Georgia, United States
Hi, I'm Carol O. I am a Christian, homeschooling mom of 3. I live in Georgia and I love rubber stamping. I started this blog to give some inspiration to others who are looking for it.

Some of my favorite blogs